At 6:30am the gates opened, the matriarch bison walked slowly out, flicked her tail and posed for the camera, before looking back to the two waiting youngsters who then followed her out. They obligingly nibbled the strategically placed snacks of silver birch branches to satisfy the press before slowly walking into their new woodland home. It was a dream moment, not only the launching of the project but because the animals behaved exactly as we hoped they would.

This release was the result of three years of hard work on the Wilder Blean Project. This is a partnership project between BIAZA members the Wildwood Trust and the Kent Wildlife Trust, funded by the players of the People’s Postcode Lottery. The project is seeking to introduce an assemblage of herbivores into the woodland to restore its natural ecological systems, boost biodiversity and reduce the need for human management. The site covers a 500-hectare area of the Blean woodland in Kent, immediately adjacent to Wildwood’s perimeter fence.

In the UK, the lack of woodland management is one of the biggest drivers of species decline. Traditional human management alone is not enough to create the kinds of habitats that species need. According to the latest State of Nature report our native species are currently declining at their fastest rate for thousands of years. Nature needs complexity to thrive and in order to deliver that, we need natural solutions, exactly what this project aims to provide. 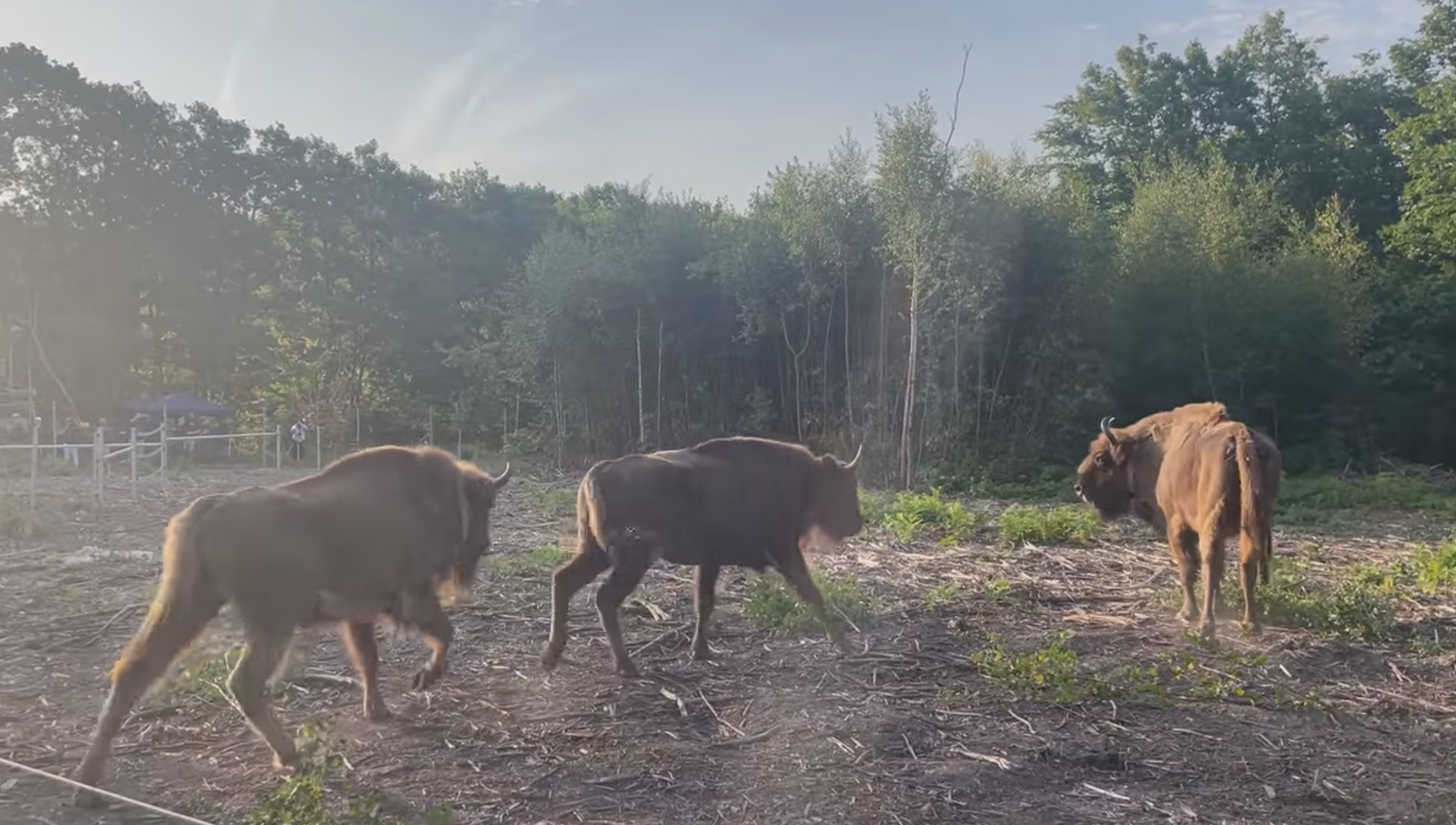 The bison themselves are powerful ecological engineers, changing their habitats as they live. The bison will be joined by Exmoor ponies and Iron Age pigs and between them, they will change the ecology of the site, creating complex food webs that have been missing for centuries. This should then create an explosion of biodiversity in the area and produce habitats that are more resilient to pests, drought, disease and other impacts of climate change.

These initial three animals are three unrelated females. An older matriarch originating from Highland Wildlife Park and two young females from Fota in Ireland. They will be joined by a young bull in a few weeks’ time. The animals are all part of the EEP and will form a genetically important herd for the population. It is hoped that they will be a source of bison for similar projects in the future.

The complexity of bringing in bison from outside the UK following Brexit has been a huge hurdle for the team, but weeks of work by Mark Habben (Director of Zoo Operations) and Judi Dunn (Registrar) have paid off and the Irish animals arrived on schedule.

Detailed baselines for each area have already been collected, covering vegetation, reptiles, insects, bats, mammals and many others. These will continue to be closely monitored over the coming years to see exactly what impact the species have had and what difference the introduction of bison can make to UK habitats.  Teams of conservationists from Kent Wildlife Trust together with students and volunteers, will be out on site conducting extensive fieldwork and analysing data on almost everything, including soil health, insect and animal abundance, vegetation structure and natural processes. We are also collaborating with organisations like the Natural History Museum looking at eDNA.

In the week since the release, the story has hit local, national and international press.  There have been over 1,000 individual reports with a reach of 3.5 billion people, the project made the front page of the Guardian, Telegraph and Independent. The positive message of this project seems to have really caught the public imagination.

We are used to hearing terrible news about the climate and biodiversity all the time, here in Kent we have made one small step forwards in the fight back. We are hoping this will inspire many others, so that together we can create a future where there is still hope for wildlife, a wilder future.

Director General of the Wildwood Trust.