The global conservation community is celebrating the birth of a ‘near extinct’ deer fawn at Chester Zoo. The tiny arrival, a highly endangered Philippine spotted deer, was born weighing just 3kg following an 8-month long gestation. Zookeepers have named the female youngster Lyra, after a constellation of stars, and her name joins a theme that it shared with her mum, Nova, and dad Cosmos.

The birth is part of an acclaimed conservation breeding programme, set up at the request of the Philippine government to ensure a genetically viable population live in leading zoos in Europe.
It’s estimated that as few as 700 Philippine spotted deer, also known as the Visayan spotted deer, now remain in the wild. The rare species has been declared endangered by the world’s authority on the status of the natural world, The International Union for the Conservation of Nature (IUCN).

Sadly, the animals have already become regionally extinct on several islands in the Philippines as a result of intensive hunting and huge amounts of deforestation and forest clearance. Now, the deer can be found only on the islands of Panay and Negros.

Zookeeper Emma Evison said:
“Every Philippine spotted deer birth is absolutely crucial to the long term survival of this species, so we were absolutely overjoyed to see a fluffy bundle alongside mum Nova one morning. The female calf, who we’ve named Lyra, is our new little star!

“At birth the fawn only stood at 30cm tall and weighed just 3kg, but after a few weeks on mum’s milk she’s already shot up and has gained in strength and confidence – she’s full of personality and is keeping mum busy with her new found energy.

“This new arrival is a significant addition to the endangered species breeding programme, which is just one part we play in helping to protect the future of this near extinct species. Crucially, the zoo is also working to protect the Philippine spotted deer in its homeland, while educating and empowering local communities that live alongside them.” 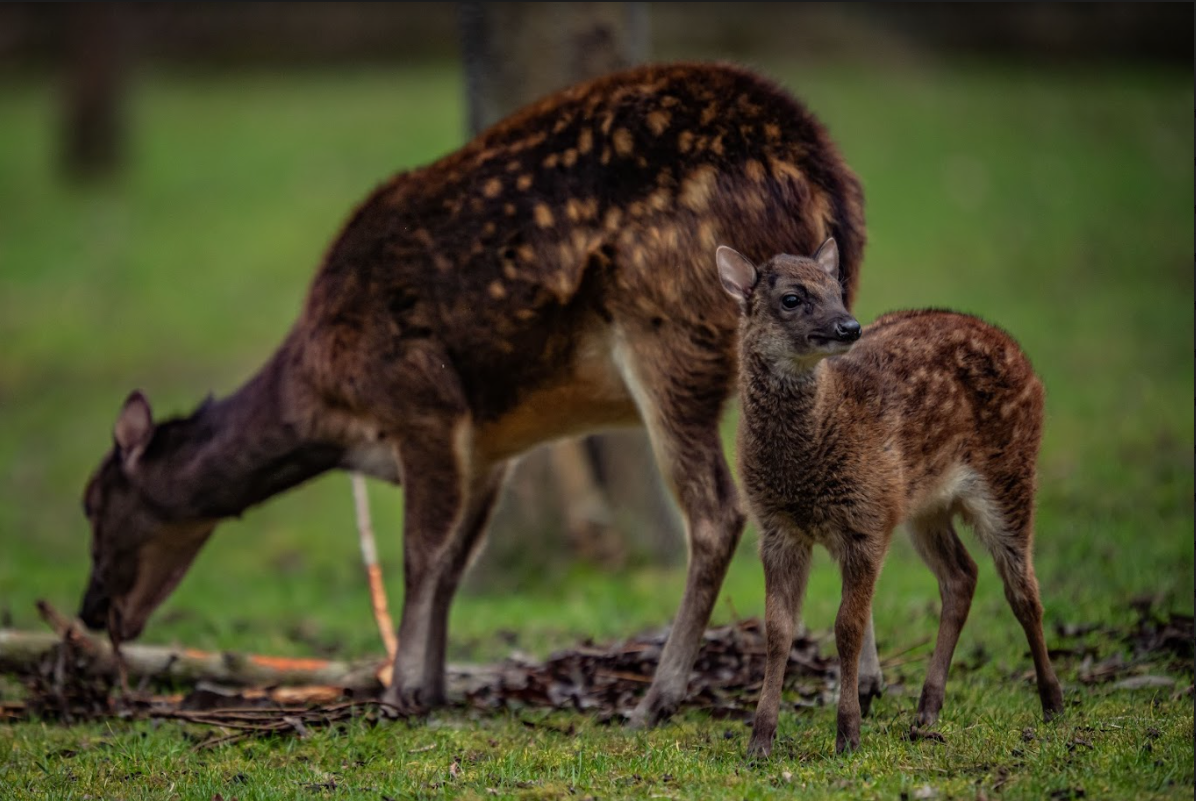 Zoo conservationists have been supporting efforts to protect and restore the habitat in the Philippines, while also funding critical breeding centres for a number of highly endangered species, including spotted deer, for more than two decades. In 2020 the zoo and its partners safely reintroduced 28 Philippine spotted deer back to the wild into a protected nature reserve.

“For more than two decades we have worked closely with our partners in the Philippines, helping to protect this charismatic species from extinction. This began by funding and helping to build vital conservation breeding centers on the islands of Panay and Negros, while providing caregivers with all of the important information that our experts here at the zoo have gathered by successfully breeding this highly endangered species.

“Over the years the breeding centres, such as the Talarak Foundation, have become hubs for training, research and education and have actively increased the population of the Philippine spotted deer, reintroducing 28 of the animals to their former stronghold in 2020 - and we’re very pleased to report that the group is now thriving in their new home.

“This is the first time a reintroduction of this scale has been attempted in the region and is a landmark moment for the future of the species, thanks to a worldwide collaboration of conservationists.”