Dr Maria Marra, talks about the new Curam Sponge exhibit at Galway Atlantaquaria which is showcasing how the humble sponge is inspiring medical technology:

"Rockpools host a variety of organisms, some of which are unknown by most people, and a perfect example of this are the sea sponges.

When they hear the word ‘sponge’, many people immediately think of the sponges used to clean dishes after a meal, others would remember the yellow soft sponges that are used to give babies a bath, and some of us might think that about some sort of weird plant! Actually, there is a bit of truth in all of these ideas, but let’s proceed one step at a time.

Sponges are the ancestor of all animals, us humans included, believe it or not! They are extremely simple organisms made of different types of cells immersed in a gelatinous substance. The outer surface is surrounded by a skin-like layer, and their body is pierced by multiple pores called ostia which lead to a system of internal canals. This structure of the body is what gives these animals the scientific name of ‘Porifera’, meaning ‘pore bearers’.

Sea water gets into the body of a sponge and circulates inside where it enters chambers of specialised cells. These cells have projections arranged like a skirt that act like a sieve, filtering from the water all the organic material the sponge feeds on. Once filtered, water is expelled from the body of the sponge through openings called oscula. This system means that the sponge’s body is very porous, which explains why they can absorb so much water and why they have been continuously used by humans to wash surfaces from our own skin to our cars.

The apparent simplicity of these animals as filter-feeders might make you think that sponges are harmless. But in fact, despite the lack of protection given by shells, scales, thorns, teeth or any other possible type of physical defence, sponges are on the forefront of intense competition for seafloor space without us knowing it.

So how do they compete? The answer is pretty cool: sponges have evolved an arsenal of complex compounds that can be extremely toxic to potential predators or unfortunate neighbours. Don’t worry though, very few sponges can be considered harmful for humans!
Sometimes, these toxic compounds are not produced by the sponges themselves, but by microorganisms like bacteria or fungi living in the sponge. Sponges cleverly take advantage of their microbe tenants for their own defence in exchange for nutrients and shelter. Just imagine it, a large number of invertebrates like crustaceans, worms and seaweeds living in the sponges and using their canals as a shelter. Plus, sponges can host a plethora of bacteria, viruses, fungal spores, yeasts and microalgae which can get so crowded that they make up 35% of the sponge’s volume!

These microbes can produce an incredibly diverse range of unique chemical compounds, and there are many pharmaceutical drugs based on them, so it’s not surprising then that in the last few decades scientists have been busy studying the compounds produced by the sponges and the microorganisms living inside them. It was discovered that these molecules can be used to treat a range of human diseases. One group of scientists is based in the National University of Ireland Galway and it’s called CÚRAM, and they are studying the slime produced by some Irish sponge species to fight cancer and harmful microbes. In 2021 the CÚRAM team established a new public exhibition based in Galway Atlantaquaria showcasing how marine resources can aid medical research. The exhibit is located on the upper floor of the National Aquarium and is fully accessible. Visitors can browse tanks and models of marine resources that are used in medical device research. 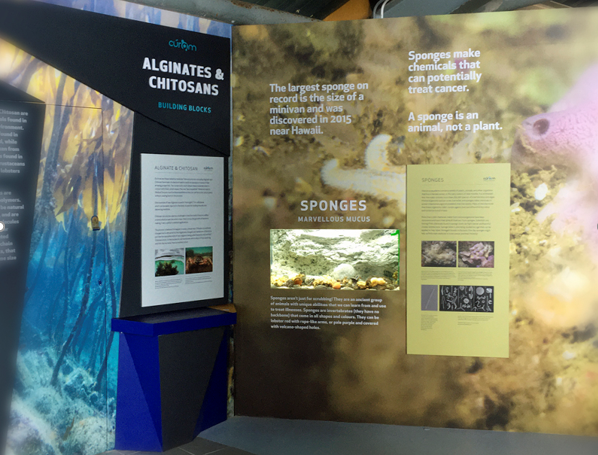 The CÚRAM exhibit at Galway Atlantaquaria. The picture above shows the part of the exhibit dedicated to the sponges, but there are other organisms to discover too; like the barnacles and the beautiful diatoms and coccolithophores!

As well as showcasing how marine-inspired medtech can heal the body, the new exhibit also reinforces the importance of ocean health and conservation, tying in with the Galway Atlantaquaria’s education programme. The sponge tank gives the opportunity learn about these fascinating animals alongside other organisms with biomedical potential like seaweed and barnacles.

Now that you’ve learned so much about sponges, you may be wondering where to find them. There are around four hundred different species of sponges in the waters of Ireland and the UK, and only a few of them can be reliably identified by eye. Sponges can be found on the shore at low tide, under rocks (but don’t forget to put them back in the same position as you found them!) you might discover a sheet of multicoloured tissue: orange, red, yellow, green, even pink. It is not necessarily easy to tell which sponge you’re looking at though.
There are great resources out there to start getting familiar with the most common species. Like the ‘Sea Squirts and Sponges of Britain and Ireland’ guide published by Seasearch in 2018.

Also, if you are a diver you can join two great citizen science projects currently carried on by Seasearch Ireland. One is the Sponge Safari, which aims to increase records of the six most common and easily recognisable sponges: the chocolate finger sponge, the crater sponge, the black tar sponge, the boring sponge, the elephant hide sponge, and the purse sponge (all super cool names, aren’t they?!).

Seasearch Ireland is also continuing to collaborate with us at Galway Atlantaquaria a sponge recording project to map the distribution of sponges in Irish waters, particularly difficult to identify species, by marrying citizen science observations with microscopy analysis.
​
We hope you are intrigued now and want to learn more about these super interesting but often overlooked animals! Keep following our blog and come and visit us at Galway Atlantaquaria to learn more about sponges and many other fantastic marine creatures. Keep discovering!"

All blogs reflect the views of their author and are not a reflection of BIAZA's positions.