At the daily penguin talks in the Park’s Discovery Trail, keepers have been pointing out ‘Frodo’ and ‘Arnie’, a pair of male Humboldt penguins who have been a couple since 2020 and are currently testing out parenthood, by incubating a rock. The couple are often seen either in their nesting box, sharing their parental duties, or out on the ‘beach’, preening each other or displaying natural courtship behaviours.

West Midland Safari Park's Head of the Discovery Trail, Amy Sewell, said, “Arnie and Frodo are one of our strongest penguin pairs. It’s great that they’re both interested in nesting and are spending so much time incubating a rock, as it means that we can give them the opportunity to incubate a fertile egg if we need to.

“Humboldt penguins usually lay two eggs, but often tend to pay more attention to the larger egg, meaning the smaller egg might not hatch. By allowing Frodo and Arnie to care for the smaller egg and raise the chick, it means that we could have more successful hatchings, with a greater number of healthy chicks being raised by loving parents, even if biologically the chick isn’t theirs. This has been very successful at other wildlife parks, so we hope Arnie and Frodo will get the chance to raise their own chick, as I expect they will be perfect parents.”

Humboldt penguins are listed as “vulnerable” by the International Union for the Conservation of Nature (IUCN), with numbers decreasing and only 12,000 breeding pairs thought to be left in the wild. The Park’s penguins are part of an EEP (EAZA Ex-situ Programme), a collaborative breeding initiative between European zoos, to safeguard endangered species, so the coupling could be good news for the future. 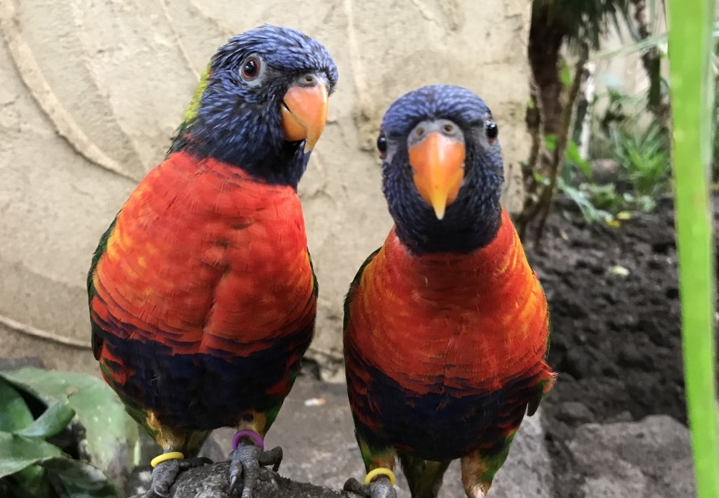 Elsewhere in the Park, the penguin’s noisy neighbours, the rainbow lorikeets have also shown how different relationships can help the success of their species. Not only can same-sex pairs be found in the nesting boxes, but some of the Park’s most successful breeders are a ‘throuple’, consisting of two males and a female.

Like the penguins, lorikeets also tend to lay two eggs, but with three birds looking after the eggs and subsequently raising the chicks, they have more opportunities to thrive, with more attention, more food and more eyes on them to keep them out of trouble.

Lorikeet Keeper, Laura Hodgkins, said, “As a keeper here at West Midland Safari Park and someone who is a part of the LGBT+ community, I am proud to work for a company that wants to celebrate Pride. Some of the animals here at the Park are also a proud part of the community, including our rainbow lorikeets.

“We have several monogamous, same-sex pairs and two sets of ‘throuples’ within the flock, who have very naturally partnered up and have even gone on to rearing chicks, some of which have raised ten or more chicks. The ‘throuples’ tend to start as two males, who then accept a female into their group as a surrogate. They have been very successful breeders, showing that diversifying relationships can have an evolutionary advantage. It’s just wonderful to see that even in the animal kingdom, love is accepted in all shapes and forms.”

During Pride Month, keepers created a rainbow of lorikeets by placing nectar on the floor in an arch. They have also been educating guests about all the different relationships in the lorikeet environment, as they pass through.