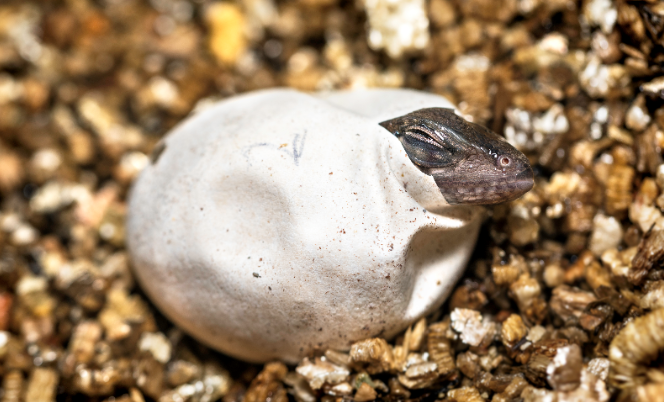 This is the magical moment when a tiny iguana first broke through its inch-long shell at Bristol Zoo Gardens. Reptiles Senior Keeper Adam Davis was on hand as the Utila spiny-tailed iguana began to hatch after 74 days in an incubator. It was followed by a second and both are now thriving and can be seen in the Zoo’s Reptile House.

Tim Skelton, Curator of Reptiles at Bristol Zoo, said: “It’s great to have bred these rare iguanas – it is an interesting and very valuable species because they are only found on one island, Utila, off the coast of Honduras in Central America.”

Utila spiny-tailed iguana are Critically Endangered and were once considered to be one of the rarest iguanas in existence. Their mangrove forest habitat is being cleared to make way for marinas and their beach nesting sites are polluted with plastic, trampled by cattle and raided by rats. The iguana and its eggs are harvested heavily; females carrying eggs are cooked and eaten as a traditional cultural delicacy.

Safe in the zoo the young iguanas are now around 20cm long and will grow to up to 80cm long on a diet of vegetation and small insects. All juveniles are grey-brown in colour but may develop a turquoise tinge as they grow.